The importance of forearm support and sources of mouse pain 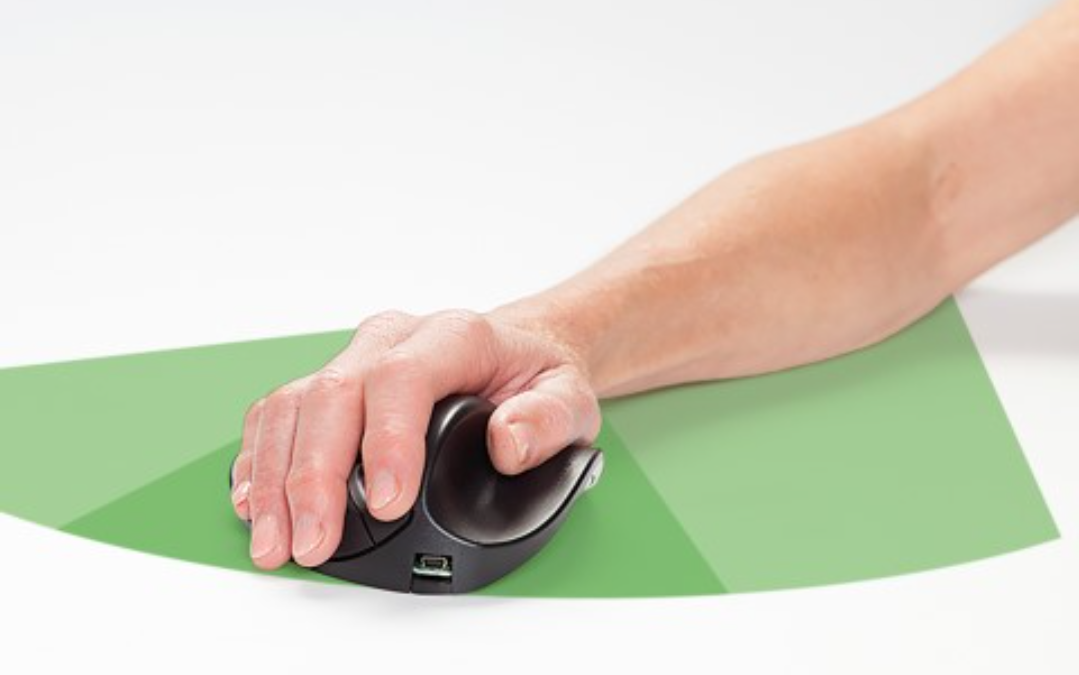 The importance of forearm support and sources of mouse pain

It is important to relieve the load on shoulders and arm. This in view of the required effort to
move a non supported arm for example when operating a computer mouse.
Note, the weight of an arm is substantial.

We therefore advise to use either arm rests to support the forearm or to put the arm on the
desk top, for example ¾ on the desk top and ¼ over the edge of the desk.
The hand can then be comfortably supported by the body of the HandShoe Mouse.
Minimal effort is then required to move the mouse by means of forearm and hand.

It is also important to sit in a comfortable fashion. The backrest of a chair should be at an
angle of around 110 degrees with respect to the seat of the chair, while the seat is at 0 degrees.
The latter to prevent sliding.

The following video tells all about it:
http://handshoemouse.com/news/ergonomic-mouse-stop-reaching/

Activity of Trapezius and Deltoid Muscles

One should realize that arm and hand activities have an effect on the Trapezius muscle.
However, there is only a partial influence on the Deltoid muscle for example when reaching.
So to prevent unnecessary muscle loads one should support forearm, hand and fingers.

Studies have shown that unnatural forearm positions, supination angles of over 25 degrees, the so
called neutral or handshake position, will introduce unnecessary loads. Restricting the
supination angle by means of a supporting body for the hand of around 250
prevents this.
http://handshoemouse.com/news/use-of-ergonomic-mouse/

As addressed, minor movements from the wrist are OK but to “snap” the wrist sideways is
detrimental. The following image of an arm with points indicated by A and B reflects
muscle irritation due to excessively moving the hand sideways (wrist snap).

In line with the above it should be noted that wrist supports act counter productive for
forearm motion will be restricted resulting in excessive wrist (snap) motion.
http://handshoemouse.com/news/ergonomic-mouse-forget-wrist-support/

The effect of aging in combination with wrist snap can be dislocation of the Articular Disc.

Other sources of mouse pain are presented in the following video:
http://handshoemouse.com/news/what-causes-mouse-pain/

http://www.handshoemouse.com/dnld/Ergo-Expo-Webinar-slides-Paul-Helder-2014.pdf
Publication by Bart Visser et al in Clinical Biomechanics 15Supplement No 1, 2000, S34-S38
“The effect of arm and wrist supports on the load of the upper extremity during VDU work.”

Lower levels of trapezius muscle activation were recorded with the use of arm supports.
Wrist supports did not reduce activation.

Reduction of muscle activation in the neck-shoulder region during standard visual display
unit work can be achieved with arm supports. Wrist supports do not reduce the strain on the
neck-shoulder region. Subjective ratings seem not of use in selecting ergonomic aids in low
intensity tasks.
Visual display unit workers are at risk of developing complaints of the neck and upper
extremity. Arm and wrist supports are introduced at the workplace to reduce the workload.
If arm and wrist supports are effective in reducing the workload they might be of use as
preventive measures to reduce the risk of neck-shoulder complaints.
Publication by professor Han-Ming Chen et al in Clinical Biomechanics 22, 2007, 518-523
“The effect on forearm and shoulder muscle activity in using different slanted computer mice”

Background information on how to work in a comfortable position is provided, for example
the positive effects of a slanted mouse (palm supporting area at an angle of 25° or 30°).
Forearm and shoulder muscle activity will reduce in this position.
Increasing the slanted angle will result in a larger wrist extension and thus higher muscle
activity.
Working with hand and forearm at a suitable slanted angle provides a more neutral hand
position, so forearm and shoulder muscle activity will be reduced.
Publication by Onyebeke LC, et al. Applied Ergonomics 2013 Sep 18
“Effects of forearm and palm supports on the upper extremity during computer mouse use.”

The use of forearm support compared to the no support condition was significantly
associated with less shoulder muscle activity and torque, and the raised palm support was
associated with less wrist extension.
Participants reported less musculoskeletal discomfort when using a support.
It should be noted that some aspects addressed in this paper must also be looked at from the
perspective of findings by other researchers presented in this overview of publications.
Publication by Bjarne Laursen et al in Int J Occup Saf Ergon. 2001;7(2):179-93.
“Shoulder muscle activity in young and older people during a computer mouse task.”

Shoulder muscle activity during computer work is affected by age, but only to a minor
extent by the type of computer mouse task. The deltoid and the trapezius muscle activities
are low during computer mouse use when there is efficient forearm support by the table.
Publication by Danuta Roman-Liu et al in Clinical Biomechanics 2000;15 Suppl 1:S30-3.
“Assessment of the musculoskeletal load of the trapezius and deltoid muscles during hand activity.”

The purpose of the study was to analyse the influence of the precision of a task on tension
and fatigue of the trapezius and deltoid muscles. Ten young men took part in experiments.
Different levels of force and different frequencies of pressing a button defined the precision
of the task. Surface electromyography (EMG) was used.
Muscle tension and fatigue were reflected by 2 parameters of the EMG signal: the Root
Mean Square amplitude related to the maximum value and changes in the Median Power
Frequency.
The results showed that hand activities influence the descending part of the trapezius muscle
and do not influence the deltoid muscle, and that the precision of work can influence the
examined muscles of the arm and shoulder even during work in which only the hand is
involved in a performed task.